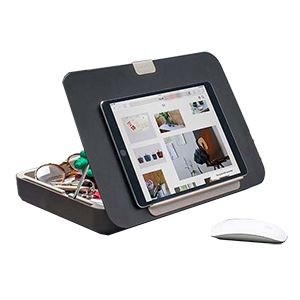 Most computer users like to have a variety of effective and efficient information at their fingertips and in front of their eyes. The more information, the better informed, the quicker decisions, equals the more profitable outcome.

So in some ways, a variety of monitors on the desktop is literally an expression of pure capitalism; which we are reminded of when, for example, newsrooms reporting on financial market decisions usually have a reporter standing in front of multiple monitor screens, with agitated, meticulous traders arguing behind them.

Not everyone wishes to be an agitated, argumentative trader, but most want to be on top of their daily information. So, how many monitors to put on a desktop? Firstly it was one monitor, then a laptop supported by a stand next to it. That morphed into a twin monitor setup, both on different monitor arms for different workspaces. But now, the trend is for a large (up to 34”) monitor to be placed on the desk with software enabling many windows to be opened within that large screen.

The laptop itself can be a so-called ‘thin climate’ device, or a separate, entirely autonomous laptop that can be carried around, attached to multiple monitors. Is the laptop screen open or shut, or is there a choice? The laptop should be supported and raised into an ergonomic position.

This is where devices such as Uplifting’s Bento Box comes into use. The Bento Box is used to support the laptop, as well as holding accessories for daily use (e.g. pens, paper, even chewing gum, and, dare we say it, cigarette packets) as well as acting as a general document holder. Whatever your monitor combination on your desktop- Uplifting Solutions has a suitable array of monitor arms to support your viewing choice.

Find out more on our numerous ergonomic products, at https://uplifting.com.au